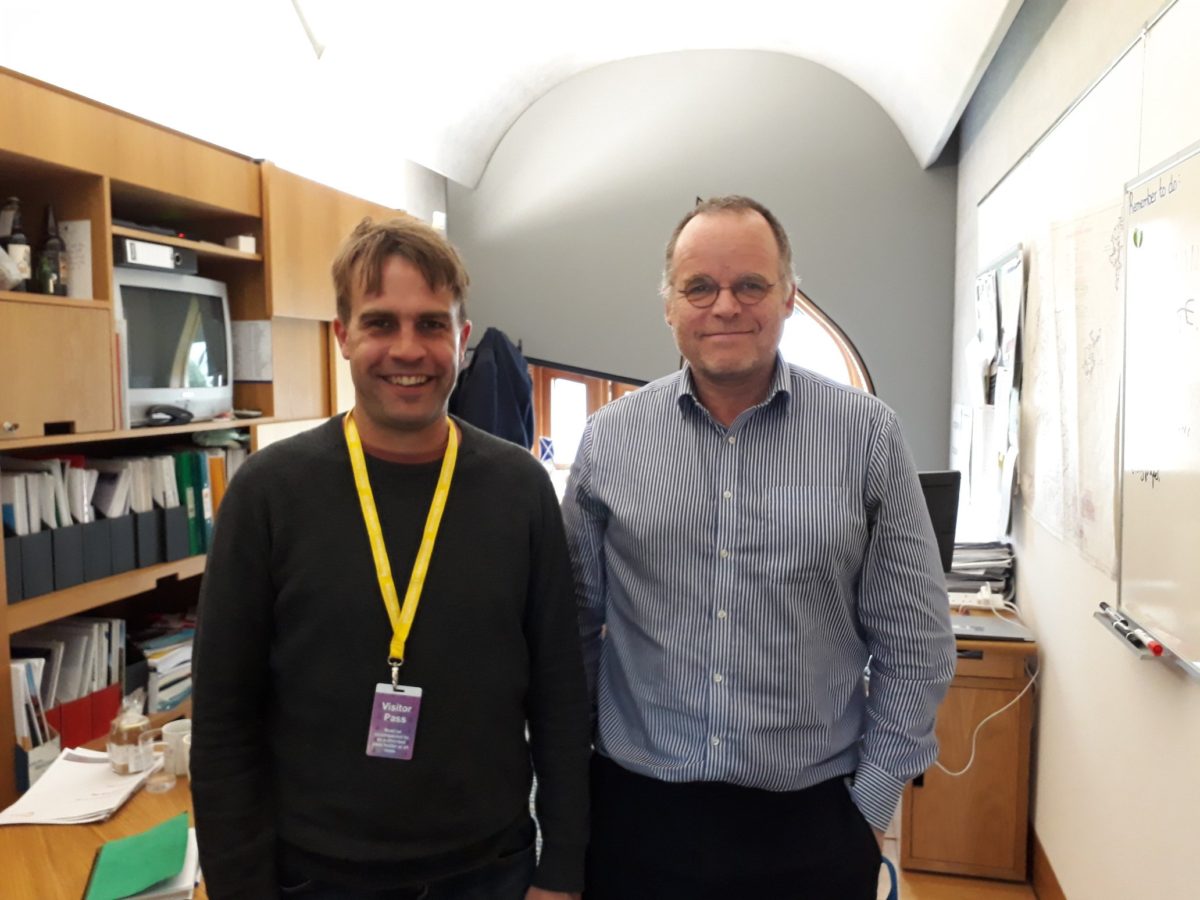 The play’s the thing. Or is it? Our latest Shadow Scheme raises some fascinating fundamental questions about the ‘great game of power’ between local communities and government.

Can community activist theatre help local communities become more realistically involved in shaping the policy decisions that affect our everyday lives?  That begs a few more questions. What is community empowerment? Can an uplifting concept change anything actually happening on the ground in real life?

Enter Gavin Crichton (pictured left) to meet and shadow Andy Wightman, Green MSP, in the Scottish Parliament. Locally, nationally and across the world – this could hardly be a more crucial time for democracy.

And Leith Open Space is delighted to be playing a backstage role in supporting the shadow scheme sponsored by Creative Scotland. Funding through their See, Learn, Share programme has enabled Gavin to spend time shadowing the work of an MSP, and engage in discussion with policy makers in the Scottish government.

The project got the go-ahead earlier this year with the help of Andy Wightman’s letter of support for Gavin’s application. “This question chimes with my interest,” he wrote,”in exploring ways in which local communities can be more involved in decisions which affect their lives.”  (The Green MSP for Lothian Region, is the party’s spokesperson for Communities (including Housing); Land Reform; Local Government.)

It’s an interesting development both for Active Inquiry and Leith Open Space. As the Active Inquiry website explains, Forum Theatre is a unique form of participatory theatre which actively engages the audience. The aim is to ‘transform spectators into actors, enabling them to step into and change the action’. It draws on the inspiration of Augusto Boal’s Theatre of the Oppressed, using political theatre to educate and motivate: a ‘rehearsal for reality’. (And if you have ever attended an Active Inquiry play you will know that it’s almost impossible to remain a passive observer.)

But that brings challenges in an age of shrinking resources. Competing for funding often poses moral conflicts for organisations who find themselves – however deftly – reshaping their aims to fit the political objectives of the moment.

Active Inquiry has contributed to a powerfully thought-provoking paper, The Great Game of Power, painstakingly examining and evaluating the lessons from recent projects.

“What is the point” the authors ask, “of work with participants if it maintains the status quo and does not support the necessary challenge to change the conditions of their disadvantage?”  Does creative work with communities risk providing ‘fishbowls of the oppressed’ in which power relations are not challenged?

Out of the shadows

These are also good questions for Leith Open Space which launched the first shadow scheme in 2006 after a multicultural open space discussion event produced a challenging action point: “Ethnic minority communities should be more engaged in the political process.”

“I feel I have learned a lot already just by meeting you this afternoon. I am doubly lucky as I will benefit both as MSP and in my role as Minister for Communities”

So much has changed since then (it was indeed a different political landscape and there was no social media to amplify the echo chambers). But so many issues remain the same. Over the intervening years, the shadow scheme has expanded to include participants from many different backgrounds.

Not everyone has been from ‘ethnic minority communities’. But everyone signs up wanting to know more about the political process, the balance of power between local and national government. And what ordinary people – and the many different communities they belong to – can do to influence political decisions. Apart from voting in elections or referendums!

Meanwhile, a glimpse at Andy Wightman’s Twitter feed shows an extraordinary interaction of local and global, personal and political events and activities. Not least, the impact of Airbnb short term lets on housing affordability and availability in an increasingly crowded city like Edinburgh. To say nothing of Climate Change. Or Brexit.

What can we learn from each other?

When Leith Open Space began the first shadow scheme, we took the inspiring model of Operation Black Vote as it invites both parties – shadow and mentor – to share what they have learned from each other.

For the last six weeks, Gavin has attended parliamentary events, met policy makers, discussed a wide range of issues with Andy Wightman and his team, and observed for himself the workings of Scottish Parliament committees, and debates in the Chamber.

Inevitably, this year’s extraordinary volatile political environment is interfering with the diaries of politicians! But in setting up the programme we have had supportive cross-party responses – from Ben Macpherson, SNP MSP for Edinburgh North and Leith, who is also Minister for Europe, Migration and International Development. And from Claudia Beamish, Scottish Labour MSP for South Scotland, who (like Andy Wightman) is also a member of the Environment, Climate Change and Land Reform Committee.

If possible, we still hope to develop a cross-party discussion on creative ways to make community empowerment a reality.

In any event, we very much look forward to the final meeting with Gavin and Andy to hear what has emerged from the shadow programme so far. And where we might go from here.