Just one of hundreds of images of the Pakistan floods, the YouTube series by Islamic Relief

An email arrives confirming our donation.  The World Kitchen in Leith evening at Out of the Blue raised a total of £288 towards the Pakistan Flood Relief Appeal.  It seems a very small contribution towards relieving some of the suffering in a disaster which shows no signs of letting up.

Pakistan estimates it could cost £10 billion to rebuild the areas devastated by flooding. But our donation is just one of many and it is good to see that the Disasters Emergency Committee has praised the UK response.

It is often hard to know where to start. We sent our donation to the Disasters Emergency Committee, a collaboration of 13 humanitarian aid organisations including Action Aid, Oxfam, Islamic Relief, Red Cross and Tear Fund. 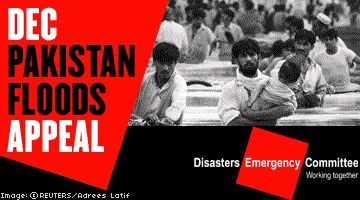 Their mission – according to their website – is to get effective relief quickly to the people who need it most and it is worth taking a look at  a few of the hundreds of films online to get an idea of the scale of that task.  Some of the videos are just seconds long – one of them is a close up of a human face simply saying “I am so sorry” over and over again – others are professional reports by the BBC, ITN, AlJazeerah, South Asia News.  Together they probe into corners we do not often see on the nightly news bulletins.

The film at the top of this post is one of a series by Islamic Relief, charting the spread of the flood waters and the impact on people whose lives may be changed for ever – villages that have disappeared below the water, displaced people crammed into refugee camps.  As the Scottish comentator starkly observes, the  reality of life in the camp can be summed up with the simple arithmetic: two toilets to 8,000 people.