This is life in Leith, dear reader, so be prepared for full frontal honesty, sweary words and raw humour. The Darting Salamander, Leith’s first anthology, is not afraid to probe some of the darker corners of Edinburgh’s ‘coolest’ part. 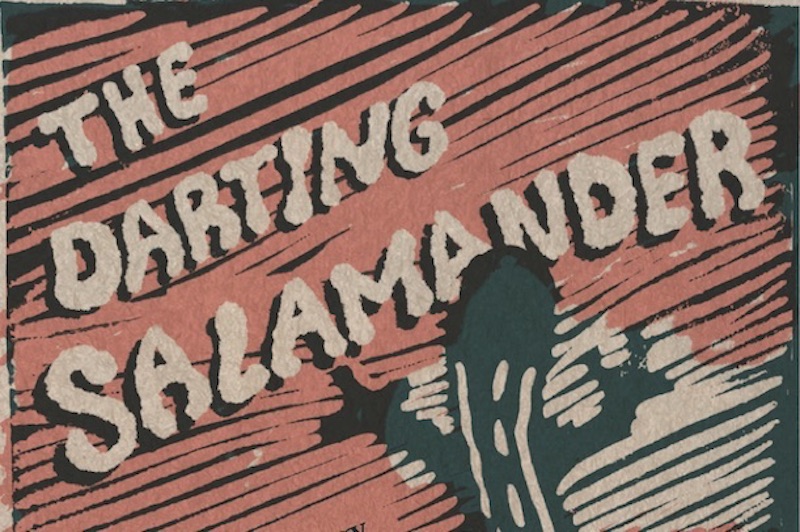 Much against his will, Mossman peered over the edge. Below him was nothing but a three hundred foot drop to a really bad hair day.

What happens next? There are bleak beginnings, unexpected middles – and even some happy endings.

This is life in Leith, dear reader, so be prepared for full frontal honesty, sweary words and raw humour. The Darting Salamander, Leith’s first anthology, is not afraid to probe some of the darker corners of Edinburgh’s ‘coolest’ part.

Coolest? Well, so says TimeOut.  But Leith part of Edinburgh?  Perhaps I should start by defining the terms.  Leith’s first anthology launches on Tuesday 2 November – the 101st anniversary to the very day of Leith’s amalgamation with Edinburgh in 1920. And there’s plenty in the 80 pages that reveal why Edinburgh’s port has been both an asset to the capital and a defiantly distinct municipality in its own right.

It’s the brainchild of Tim Bell (of Trainspotting Tours) who in that different pre-Covid era spotted an opportunity in the centenary to celebrate the local talent and community enterprise that had often gone unrecognised by much of Edinburgh (if not Time Out).  Covid disrupted daily life but the Leith spirit persevered. The project grew during lockdown.  The result is a handsome publication presenting the work of local writers, poets, and storytellers.  All free to the readers.

Authors and editors have happily given their time free. But there is a JustGiving campaign to raise funds to cover the essential costs of designing, printing and presenting a publication worth having and holding.  Plus a savings fund for the next edition. Thanks to Leithers’ generosity we have raised enough to bring the book to printed reality – the campaign continues to meet other expenses. No bill will go unpaid!

Who’s we? The editorial team includes Tim Bell, Nick Gardner, Gordon Munro and myself, Fay Young. [Brief explanation: in February 2020, as a distant virus was heading our way, Nick, Leith Festival Chair and founding member of Leith Open Space, invited me to meet Tim for a chat about an interesting idea. The rest is recent history – there’s no such thing as a free coffee!]

It’s been a fascinating experience. The Darting Salamander is the product of generous collaboration and community support.  Leith Trust and Leith For Ever have been stalwart supporters from the beginning, along with guidance from the enterprising folk at Out of the Blue and Out of the Blueprint. In his foreword to the book, Sir Andrew Cubie, chair of Leith Trust, explains why he was unable to say ‘no’ when we approached him. ‘The Leith Trust exists to assist in bringing the diversity of Leith cultures together’. The Darting Salamander is a perfectly bound example of what that can mean.  Besides, he adds, he remembers the warning he received at one Leith Conference: ‘I was firmly admonished from the hall not to take the grit out of the oyster.’

As she walked towards the bottom of Easter Road rebellion stirred in the young heart that was buried beneath the convenient disguise of age…Pat stood outside smoking the vape her granddaughter had given her, waiting for the other women to arrive.

No fear.  There’s true grit on every page. True love too. In fiction and in fact, prose and poetry.  Drugs, booze, mischief, murder, romance, comedy and kindness. The book’s title itself emerges (as Tim explains) from Annie McCrae’s poem  beautifully crafted into shape as ‘a new tail grows’.

There’s a story behind every story and more to tell in the scope for the future. But first we have a launch programme to pull together.  There’s still some space for Tuesday’s event in Out of the Blue – be sure to book a place on Eventbrite: Launch the Darting Salamander. Come, meet the authors, turn the pages. Be one of the #101

In 1920 Leith had enjoyed a glorious near-century of municipal independence in which slums were cleared, clean water was piped to the new tenements, schools were built and loved, the hospital was the pride of the town, Shore was lit by electricity (well ahead of Edinburgh), the Leith Police kept law and order, there was a rattling good tram system (better than Edinburgh’s), the port sent and received ships and goods to and from all over the world.

And if you can, and haven’t already done it, please consider boosting the JustGiving campaign.  Click HERE to give, a little or a lot – all donations are equally welcome

Book your ticket HERE with Eventbrite