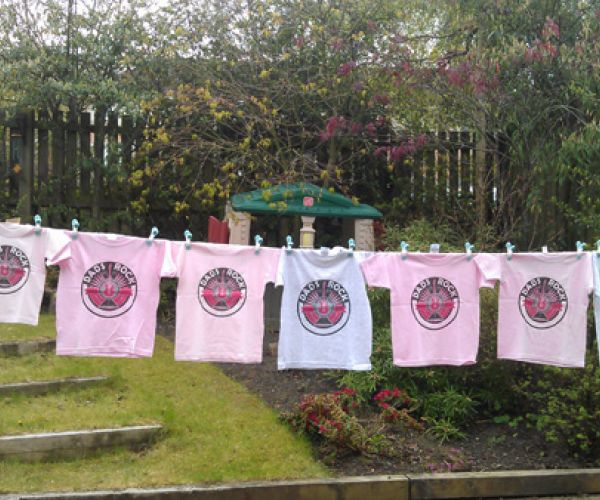 Dads are vital to helping our kids get the best start in life. One of our main priorities for 2017 is supporting more young dads.

Dads Rock turns five this week and, like all parents, the three founding fathers can’t quite believe it. As they prepare for a quiet celebration – there will be birthday cake – they have eyes firmly fixed on the next five years.

And that includes working more with young dads.

‘Young’, in this case, means aged up to and including 25 years. Dads Rock estimates around 400 young men in that age group become fathers every year in Edinburgh. ‘We’ve calculated that based on the ages of Mums,’ says Thomas Lynch, ‘But there are no published statistics on the ages of men when they become fathers. Why not?’

It’s a leading question but that’s in the nature of the pioneering charity run by Barry Wright, David Marshall and Thomas Lynch; three fathers sharing a love of rock music and determination to show that dads are vital to the upbringing of their children.

We’re delighted to add Dads Rock to the Wall of Success. Childcare is one of the key issues identified in Side by Side community discussions and Dads Rock bring a special dimension in their focus on an overlooked social need.

Where are the dads?

As Dads Rock website explains it all began when Thomas and David went to toddlers groups in Edinburgh and wondered ‘where are all the dads?’ They couldn’t find any dads groups so they decided to start one.

‘We had no plans, just a basic idea really’, said Thomas when we spoke on the phone this week, He’s thinking back to the first playgroup session at Sighthill on Saturday 11 February 2012 when he stood with David wondering if anyone would turn up. ‘One dad had contacted us asking if there would be space for him and we said yes thinking that would make at least three of us.’

Memories blur but he’s pretty sure at least 12 dads turned up that morning, giving birth to ‘Scotland’s first musical playgroup for dads and kids’.

Five years on there’s a growing list of activities. As well as Saturday playgroups in Granton, Sighthill and Craigmillar, and Sundays in the City Café, there are antenatal classes for dads and counselling sessions with a qualified counsellor for both mums and dads at Whale Arts Centre in South Edinburgh and Royston/Wardieburn Community Centre here in the North. All this is achieved with the help of Big Lottery funding and the enthusiastic commitment of fathers. That shows. When funding finished for pilot schemes in Glasgow and Fife, the fathers took on the project themselves.

We exist to help all dads be the best they can, to spend time with their children, have a fun, positive and rocking experience!

Most Dads Rock members are married or living with their children and partners. But apart from Dads Rock Academy (providing weekly rock band tuition for young people and parents) and the counselling sessions, Dads Rock aims to provide support for dads. ‘We’ve been asked if that’s segregation and I don’t like that idea,’ says Thomas. He points out that there are many groups for mums. ‘Dads Rock playgroups provide a rare place where dads can meet and talk with other dads. We’ve set up a WhatsApp group and it’s great to see how its being used. Dads are asking each other questions, you know, about feeding and sleeping patterns and all kinds of things.’

Dads Rock is proudly international (a poignant fact as Brexit raises unanswered questions about the future of EU nationals in the UK).   On that first day five years ago perhaps eighty per cent of fathers were Polish. There’s a wider mix now. In Granton the playgroup brings together dads from Germany, France, Bulgaria, Switzerland, Poland, England – and Scotland. ‘I suppose that’s part of living in Edinburgh.’

For the next five years Dads Rock will be building on the core strength of the playgroups but as they apply for the next batch of funding they see increasing importance in working with young fathers.

‘The first year is a crucial time to support young dads,’ says Thomas, ‘After that it becomes much harder for them to make contact and build a relationship with their kids.’

The fifth anniversary will be marked quietly over the weekend but there are plans for a bigger celebration in the Scottish Parliament in May with a photographic exhibition documenting the stories of the Dads Rock dads since 2012.

Ultimately Thomas hopes the work of Dads Rock will no longer be unusual. But on the morning of our phone call a discussion with 15 years olds reminded him there’s still a stereotypical view of fathers to overcome. ‘We’ve still got work to do.’

1: Our North Edinburgh playgroup, based in Granton has been going since October 2012. On average we have 15 kids and 12 dads come each Saturday for some free play.

2: We have recently attended Wardie and Craigroyston Nurseries for some free stories and songs with the children.

3: We have also been facilitating free Bookbug sessions in libraries, including Leith Library

1: We would be keen to talk to any group that wants to work further with Dads.

2: One of our main priorities for 2017 is supporting more young dads, so we would be keen to work with other organisations to do this.

Our Vision: For a Scotland where dads are seen as being equally valuable and vital.