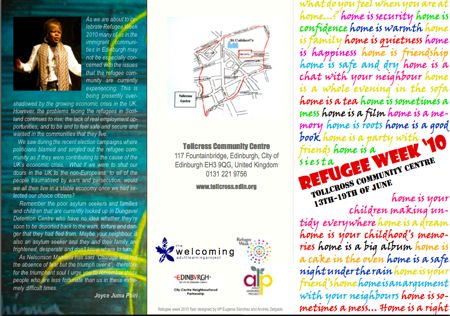 What if we shut our doors to all the people traumatised by wars and persecution… would we live in a stable economy once we had selected our choice citizens?

A thought-provoking question is posed by Joyce Juma Phiri on a flyer advertising Edinburgh events during Refugee Week from 13-19 June.  With luck the events will provoke plenty of thought and action too.  Not least a film about young Afghan asylum seekers which could hardly be more topical. e help of people smugglers.  It is a true-life award-winning documentary drama made by Michael Winterbottom (he of Cracker and Welcome to Sarajevo), featuring an asylum seeker, a market trader and a policeman.

With extra irony the young boy who played the part of asylum seeker, Jamal Udin Torabi, will be forced to return to Afghanistan when he reaches 18. (This film, made in 2002,  is newly topical with this week’s news that the new coalition government plans to deport 12 child asylum seekers back to Afghanistan every month.)

As always The Welcoming has drawn up a programme of events which are both truly welcoming and rightly challenging.  The week’s programme starts on Sunday with a film made more recently and much closer to home: A Long Way from Home showing at the Filmhouse on Sunday at 2.30pm – invites us to experience the problems of three asylum seekers from Columbia, Spain and Rwanda trying to make a new life in Scotland (The film, beautifully produced on a tiny budget by Pilton Video, was made by the refugee drama group IkaZe in collaboration with The Welcoming in 2008 and shown at the Red Eye film club last year).

Every year Refugee Week invites us to imagine what it must be like to seek a new life far from home and family.  This year The Welcoming rightly draws attention to the confusing issues of the economy, concern about immigration and the real hardship of refugees and asylum seekers (see the introduction by Joyce Juma Phiri, who came to Scotland as a refugee from Malawi and is now the Access and Inclusion Co-ordinator at Stevenson College in Edinburgh).

There is plenty more to see including A Sense of Place, an art and photographic exhibition opened by City of Edinburgh Councillors Joanna Mowat and David Becket at Tollcross Community Centre. And the week ends with a party and great music to raise money for Refugee Survival (see below).